What can we learn from Strava?


As humans, we all strive to nurture our basic needs of competence, autonomy and relatedness through our behavior. We want to feel a sense of accomplishment through what we do, we want to be in control of it and equally important: we want to experience it together with others. Exercising is a good example of behavior through which we want to nurture these needs. To keep ourselves motivated, we set goals, e.g. enrolling in a 5K running event 6 weeks from now, we team up with others for that extra bit of peer pressure that hopefully will prevent us from backing out… But sometimes, others back out before us… and then we follow… goals are not completed and our running shoes will soon collect a fresh new layer of dust.
Technology to the rescue? Maybe! Everybody knows somebody who owns a fitness tracker or an even more advanced GPS-enabled sports watch. They are developed to collect large amounts of data on our daily physical activity and/or exercise behavior. They count our steps, tell us how many calories we’ve burned, how far and for how long we’ve been running and many more. These data can be consulted on an online data analysis platform. Most of these platforms do a great job on telling us all about how well (or bad?) we are doing and how we are progressing towards achieving our physical activity goals. Feedback on our behavior, that’s the key to keep us motivated, it has been proven so many times… at least in the short term.
It appears that we abandon our fitness trackers almost as quickly as we’ve adopted them. How can this be? They give us this precious information on how well we’re doing and help us to achieve our self-set goals, fulfilling our much desired need for competence and autonomy… but we still can’t keep it up? Wait, what was that third thing we needed? Right, relatedness! What if we could share our achievements with others online?
I´m sure you already heard about Strava?! It’s a great example of an online fitness community that brings it all together, with success. On Strava, you can do everything we mentioned before, like uploading your running and cycling activities, set goals, plan your training, etc. But in addition to that, Strava successfully created a community around all of these data. Besides offering us features to ‘self-regulate’ our exercise behavior, Strava implemented two other key elements, which in our opinion, are crucial in its success: social interaction and gamification.
Social interaction features allow the users to communicate around their activities and most importantly: support each other. You can endorse your friends by e.g. giving ‘kudos’ or comments to their activity. Social support has been designated as a crucial factor for keeping up healthy behavior. When we don’t receive it offline, we can now get it online! Hurray for social interaction features, designed to fuel our sense of competence and relatedness!
What about gamification? ‘Isn’t that like giving virtual badges and stuff? That’s interesting… for a little while…’ Yes and no. Gamification on Strava is largely social. You can still get trophies for besting your 10k time, but through so-called leaderboards and other comparison tools, you can also see how you’re doing compared to people you know (or don’t know).
‘Interesting’, you say, ‘but I’m sure I’ve seen this on many other platforms?!’. Right you are, but interestingly, Strava has by far exceeded their competition in creating a social and gamified platform.
Let me show you a graph about this, based on data we collected from 332 runners who use platforms such as RunKeeper, Endomondo, Strava and Garmin connect. We asked them to indicate (on a seven-point scale) how often they use self-regulatory features (like planning a workout, setting a goal and monitor their exercise behaviour), social features (‘liking’ and commenting activities, connecting to other runners) and gamification features (collecting badges and comparing their achievements on leaderboards). While it is clear from the graph that these platform are primarily used to self-monitor exercise behavior (that’s what they’re made for), it is also pretty clear that social interaction and gamification features are a lot more intensively used on Strava compared to other platforms. 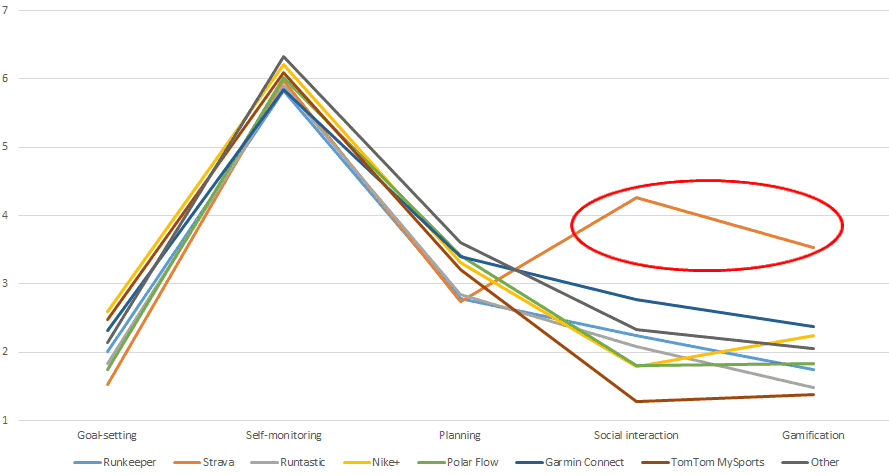 ‘Why is that?’, you may be thinking. First of all: open profiles by default, which makes it fairly easy to follow other athletes on Strava. You can close your profile, but what is there to hide? Don’t you want to show off with your new KOM (King-of-the-Mountain)? Various other platforms expect you to file a formal ‘friend request’ to see each other’s activities in your feed. Strava’s Twitter-like approach is just more appealing and social. Second, granted, on average, Strava users are more competitive and therefore more susceptible to social interaction, comparison and gamification. This will have a significant impact on the use of gamification and social interaction features, for sure. Nevertheless, to some extent, everybody seeks recognition for their achievements. Finishing your first 5K race and having no one to congratulate you, or share your sense of accomplishment with, is just very unfulfilling. Lastly, while other platforms are increasingly offering social interaction features as well, Strava has done a particularly great job on integrating their social gamification features such as leaderboards and segments. The dynamics created by these features are fueling the interaction in the community.
What can we learn from this?
While Strava is indeed for a large part populated by intrinsically motivated athletes, there are things we can learn from their successful community approach and translate these ‘good practices’ to those people who are less eager to jump on a bicycle. If we want to motivate people to move more, sit less, eat healthier,… we should not limit ourselves to designing interventions and platforms that are too strictly focused on quantifying our behavior into numbers and then use these numbers for goal setting purposes (people constantly evaluating themselves in an isolated environment). It works, no doubt, but also in the longer term? If we want to achieve long-term behavior change, shouldn’t we enable people to achieve this is a more connected environment? The example of Strava shows that integrating the right features can result in a social and engaging environment, which may lead to a  more sustainable behavior change.
To be continued…
Gepost door Jeroen Stragier op 04:49

Jeroen Stragier
Jeroen Stragier is a postdoctoral researcher at Ghent University, faculty of medicine and health science and faculty of political and social siences. His research focuses on the motivational affordances of new media and technology for behavior change.